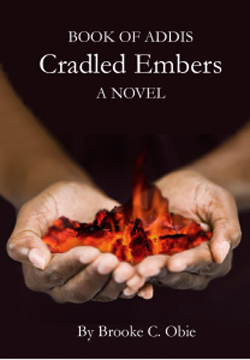 A Conversation on Black Literature, Black Women and “ADDIS” with Brooke C. Obie

Brooke C. Obie, JD, MFA, talks about her new novel, “Cradled Embers”, that debuted this summer as the first of her 3-part “Book of Addis” literary fiction series. Obie, is an award-winning writer and the former editor-at-large for EBONY.com. Her work has appeared in Ebony, The Los Angeles Review of Books, MarieClaire.com and more.

Her graduate thesis from alma mater, The New School, became the skeleton for the Book of Addis (which was a finalist for the Fulbright Fellowship).

Obie attended a writing workshop with Columbia University in Paris, and the Callaloo Journal of African Diaspora Arts & Letters Creative Writing Workshop at Oxford University where she began work on the sequel, “Burning Plains”. Written in an 18th century Black Diasporic vernacular, “Cradled Embers” reaches back in time to explore the intergenerational impact of oppression and plots a daring path into the future. With themes of Black motherhood, white supremacist systems and internalized misogyny this book is a mystical tale of love, loss, and the fight for freedom.

Q: Thank you so much for speaking with me, Ms. Obie. Let’s start with you: in your biography, you describe being a finalist for the Fullbright Fellowship while working on your thesis for The New School’s MFA in Fiction program. During this time, in what ways were you able to connect your life experiences to Addis, the 17-year-old slave girl of Igbo descent, in this novel?

A: Addis is an enslaved girl of Igbo descent. She was inspired by a true slave girl, Oney Judge, who escaped from George Washington and survived, despite him pursuing her for the rest of his life. Also, with ancestry DNA, I was able to trace my own ancestry and found that I am a majority Nigerian on both sides of my heritage.

[Addis wrestles] with being a Black girl in America, having a vague understanding of where her ancestors came from yet not having a direct connection to them [and having to] figure it all out. That is something that I have gone through even as I was able to do my research on Igbo culture, Igbo mysticism, Igboland in the Southern part of Nigeria, and meeting other Nigerians. I felt kind of rejected, so this was a way for me to express and explore my experiences through Addis.

Q: As I was reading in your biography, you described how you did not want your characters to reflect the “strong Black woman” archetype. What was it like to separate the stereotypical image of a Black woman from a truer expression of their suffrage?

A: I believe that the idea of the superhuman Black woman is killing us, as we take on this responsibility to not be vulnerable, not show weaknesses, to protect and defend ourselves and be so emotionally strong that nothing can penetrate that. I wanted to create characters who are allowed to be fully human, even in a world that oppresses them. [My] novel is about reimagining the world. In this reimagined world, there are safe spaces for Black women [to] express their robust human emotions and not be labeled or dismissed based on one emotional attribute.

Q: That’s so powerful, and going back to what you said about superhuman characteristics, Addis kills her slave master, Birken, by almost superhuman abilities (in that context), similar to Nat Turner. What was it like to write these scenes depicting such a gruesome character?

A: This was the first thing that I wrote, it was my writing I sent to my MFA program, the scene of her killing Birken. Not so much superhuman, but it was survival mode, full of adrenaline and ignorance really; she used what was available to her. With her being so young, she was not as conditioned as her mother, Taddie, as her mother saw her own mother, father and uncle murdered in front of her for trying to protect her; Addis has not been as traumatized, and that changes the way Taddie views the world.

Q: What does ‘cradled embers’ represent in the title of your book?

A: [Cradled Embers] is the beginning of the revolution. These are the people who are stoking the revolution. Even today we have three Black queer and immigrant women who started the Black Lives Matter movement. [My novel] shows that there has not been any revolutionary movement for Black lives in this country without Black women at the forefront of that movement. Many women in the book honor the tradition of Black women who act as caregivers, protectors and providers in the novel, such as Nenae, a surrogate mother to Addis when Taddie is not able to.

Q: The use of Black vernacular is a brilliant way of connecting all people of the Black Diaspora, in my opinion, and reminds me of pre-eminent African-American literature and poetry writers like Zora Neale Hurston, Paul Laurence Dunbar, Amiri Baraka, Langston Hughes and the list can go on. However, who or what inspired your use of Black vernacular in this novel?

A: I had to learn about the power of writing in the vernacular. In my MFA program, I took a course called “Writing in the Vernacular” where I read critical essays by Chinua Achebe, Toni Morrison, and other texts that were completely in Black vernacular like Marlon James’ novel, [“The Book of Night Women”]. I [wrote] in the third person, with an omniscient narrator who speaks the language of the people that the narrator is talking about. As the narrator represents the God of the Universe, in this book the God of the Universe is on the side of the people and is closely connected to the people, also due to race. The narrator is Black.

If you look at [other] slave narratives, they’re either “As Told To” or “As Written By”. They are written by white abolitionists who write to protect the sensibilities of the white audience they are persuading. My novel shows that there is a God on [the slaves’] side that understands Black presence, and show how strong the tie is for revolution and intersectional leadership.

Q: That’s beautiful because you’re giving an explicit representation of Blackness. For so long everything has been diluted, especially in this time period, so it connects many people from the Black Diaspora to a generational commonality. Overall, is this what you hope readers take away from reading your novel and what can they anticipate for the future?

A: Absolutely, I want people to walk away from this book with a sense of empowerment, community and a deep love and admiration for Blackness and to understand that we are here  because we are descendants of survivors. We should be proud of that, and some of us are ashamed of slavery, but we should find empathy for those today who are suffering more than us and also empowerment because we are here due to our ancestors who survived. I hope [my] novel inspires others to learn about notable people who lived in the country and did amazing things that a majority of the country does not want you to know.

For a chance to meet the author, on October 21 at 4 p.m., Obie will be doing a reading and book talk at Howard University Bookstore.