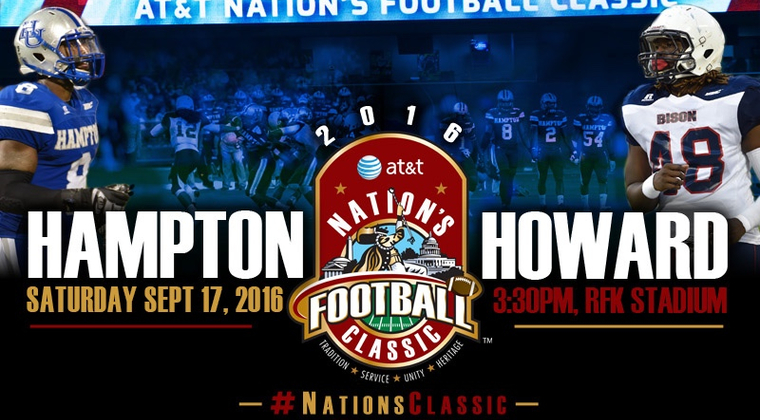 Washington D.C.’s RFK Stadium will host the AT&T Nation’s Football Classic on Saturday, Sept. 17. This is the sixth year that Howard has competed in what is considered to be one of the most elite football games amongst Historically Black Colleges and Institutions (HBCUs).

For the second consecutive year, Howard will face-off against Hampton University. A victory in this matchup gives a team and a school a sense of entitlement for an entire calendar year.

One may wonder what makes an HBCU football face-off a classic game. It’s in the passion of the players, the team spirit from the fans and, of course, the battle of the bands, which has created interest in the HBCU sports rivalry scene.

It’s not just a game to fans, students or the players. As there are other classic games that involve HBCUs such as “The Commemorative Classic” between Livingstone College and Johnson C. Smith University, the annual Rivalry Classic where North Carolina AT&T faces South Carolina State University and the Chicago Football Class, in which Clark Atlanta University duels with Central State University.

Although other classic games exist, the AT&T Nation’s Football Classic featuring our very own Howard University is different. It’s more than a college football game. It’s a week-long experience.

Most events surrounding AT&T Nation’s Football Classic are free to the public except the actual game.

The week starts with the Technoir Innovators Classic, showcasing a range of talents in the Black community. The rest of the week consists of events such as the Diversity in Sports Forum, HUHU student debate, the Pepsi Block Party, tailgating, a Call to Chapel Service on Sunday and #HashtagLunchbagDC, which is a chance for Howard and Hampton students to put their rivalry to the side for a day and work together for the betterment of the community.

Howard Bison are hoping to bounce back this year after last year’s AT&T Nation’s Classic game, when they fell 19-37 to the Hampton Pirates.

The AT&T Nation’s Classic is more than a game. It’s an experience.