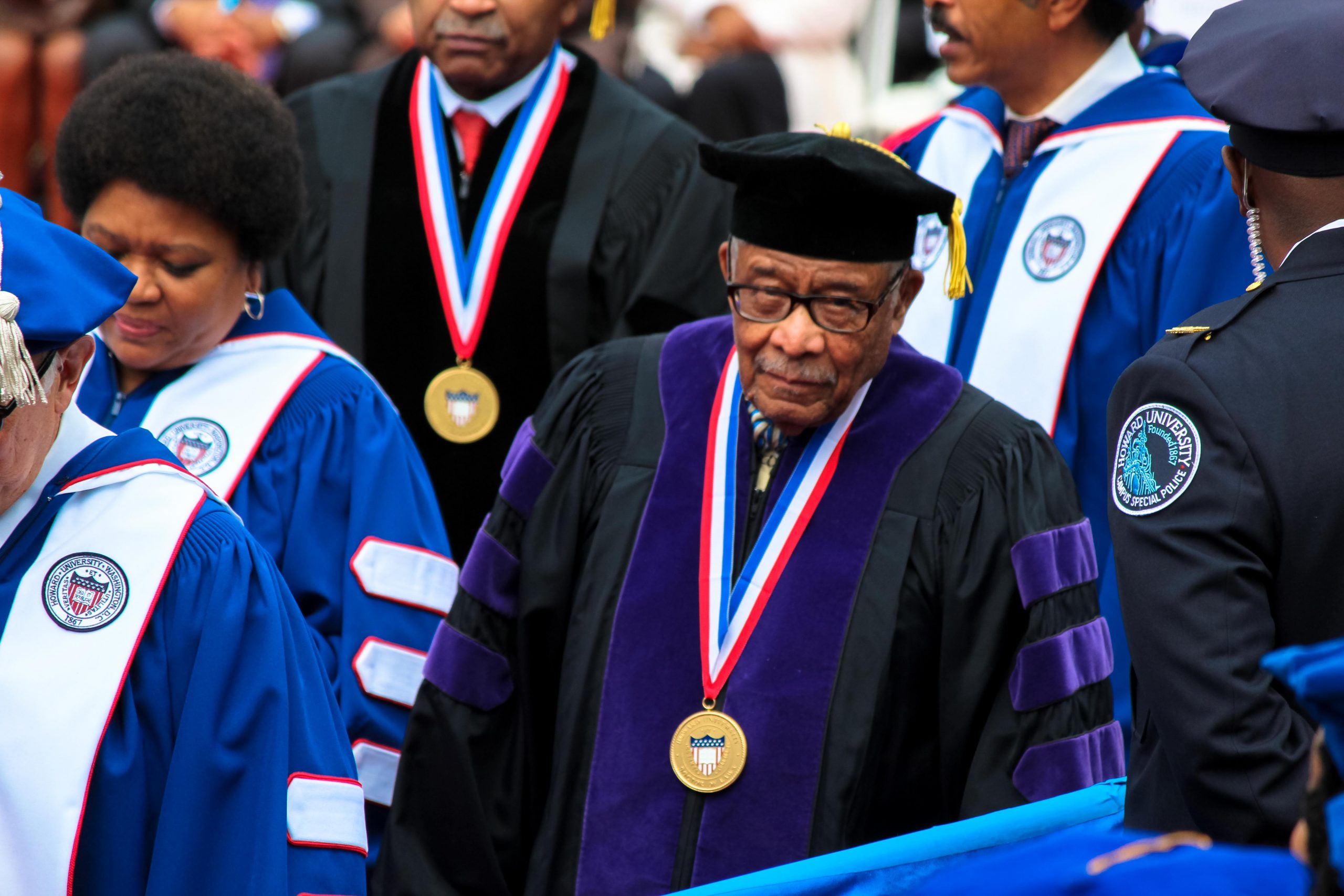 At the prestige age of 90-years-old, Ambassador Horace G. Dawson, Jr., Ph.D. personifies the symbol of public service. Dawson’s journey began as a college student at Lincoln University in Pennsylvania, where during his time there he was unexpectedly drafted into the United States Army at the age of 18. After finishing his required military service, Dawson returned back to Lincoln to complete his bachelor of arts’s degree in English. From 1962 to 1989, Dawson entered the United States Foreign Service and served in many components to include being a cultural affairs officer, U.S. Information Agency Director and was named ambassador to Botswana by then President Jimmy Carter. After retiring from his foreign service, Dawson came to Howard University in 1989 where he joined the faculty of the School of Communications. He soon became the founder and a director of the Ralph J. Bunche International Affairs Center. On Saturday morning, Dawson received an Honorary Degree in Doctor of Laws by both Howard President Wayne A.I. Frederick and Howard Board of Trustee member Charisse R. Lillie. The Hilltop spoke with Dawson about his tenure as a public servant and receiving his honorary degree from Howard University:

HT: Ambassador Dawson, you are receiving an honorary degree from Howard University during its 148th Commencement Convocation. How are you feeling about this prestige honor and recognition?

AD: It is a tremendous honor for me, one totally unexpected, but deeply appreciated. I’m just honored to have recognition from the Capstone. It’s extraordinary and a wonderful experience.

HT: In your long list of achievements and accomplishments throughout your career, you earned your bachelor’s degree at Lincoln University in Pennsylvania. How vital was attending Lincoln University towards both your foregoing career and success in being an Historical Black College & University (HBCU) student?

AD: Well Lincoln University was a tremendous factor in my life. It was a time of great change and challenge in the country when I was there. We had wonderful instructors…Howard and Lincoln were actually linked in their founding and development. At the time I attended Lincoln, it was an all men’s school and an incompatible experience. I received quality education at Lincoln University and it has lasted me all throughout my life. It also presented a challenge to try to do something meaningful in life. That’s what the Historical Black Colleges and Universities (HBCUs) tend to focus on in the development of young men and women, and Lincoln did that for me in a superb way. I gained a great deal of direction and preparation at Lincoln University.

HT: During your time at Lincoln University, you were drafted into the United States Army, serving a two-year tour of duty in Europe and the Philippines. Describe that experience and how did it help shape your aspirations going forward? Seeing that it was an unexpected chapter in your life, how did that experience help shape you in terms of public service?

AD: I went to Lincoln in 1943, the year I graduated from high school and was drafted in January 1944 as soon after the bill was passed of dropping the draft age to 18-year-old. I was in the Army by June. After basic training, I was shipped to Europe, then after the war ended in 1945, I was redeployed and sent to a different location. We were in mid-ocean traveling between England and Japan when the atomic bomb was dropped in Japan. Instead of going to Japan, we went to Manila until I came back home.

I was always determined as a young person before going to the service that I wanted to make a difference in life, especially in terms of the race issues in the United States and I tried to work hard to make a difference. That was intensified during my days in the Army, as I served in a segregated Army and always hopeful that that situation would change. It didn’t change during my stay, but I was always interested in the concept of integration of a united and just America, one that did not operate on the basis of color. My service was very important in that regard because it helped me realize the problems under which we as a group were struggling in a situation divided by race.

HT: You are a member of Alpha Phi Alpha Fraternity, Inc. and became chairman of the Alpha Phi Alpha World Policy Council. Describe your personal thoughts on the importance of Black Greek Letter organizations (BGLOs) in terms of brotherhood/sisterhood?

AD: I think that [BGLOs] is very important. I became an Alpha Man at Lincoln University in 1946, almost 70 years ago. It’s a very meaningful experience for me as I have known many brothers throughout the United States and have enjoyed the fellowship that the fraternity brings. Alpha focuses on scholarship and high ideals…and its something that I relate to with great interests and dedication. Alpha has meant a tremendous force in my life in promoting those ideals which I continue to enjoy.

AD: Howard has always been engaged internationally. Such people like Ralph J. Bunche has been on the faculty, Hildrus Poindexter, Rayford Logan, and so on…but Howard did not have an international program per say. These various interests were expressed in various departments and schools. When I came to Howard, I did a proposal to the Kellogg Foundation to have them give us money to establish a central focus and program on international affairs. The W.K. Kellogg Foundation gave us on the basis on that proposal $3 million dollars to establish that program. I was the one to set it in motion, get it going, and once it got going a couple years later we made it into a center and named in honor or Ralph J. Bunche.

HT: To you personally, why are Historical Black Colleges & Universities (HBCUs) important for both the United States and the world?

AD: I don’t raise the question of HBCUs, I think they are not only important and necessary, but they are essential. They provide, by in large, education for the largest number of African-Americans in the country and have continued to do so. They are set not only to provide good education academically, but provide an extra dimension and meaning for African-American youth. I certainly benefitted greatly from my experience at an HBCU and I cannot begin to question the importance of them. They make a tremendous contribution to not only the United States, but to the world through education of people of color beyond the U.S., such as Africa, the Caribbean, and other parts of the world. There importance, as I see it, should not be questioned. I would almost say that if they did not exist, I think it would be necessary for us to create them.

HT: What is some advice you would like to give to the graduating class of 2016 as they are now both Howard and HBCU alumnus moving into a new chapter?

AD: Well first of all, I’m honored to be a part of the class of 2016. To my fellow graduates, I would encourage them of taking advantage of all they have acquired at Howard University in a way of education, experience, and dedication to have values and purpose. To do that, to take advantage of that throughout their life, to find a goal in life to pursue it with dedication and energy and conviction, and seek to make the world a better place in whatever endeavor they choose.